Like my fellow blogger ordinarygoodness mentioned in one of her recent posts, I have also been trying to take photographs of the fantails (piwakawaka) in my garden, who give me so much pleasure and enjoyment with their “cheep-cheep-cheeps” and acrobatic displays at close quarters. (Perhaps a mite too close for my liking sometimes, given that at least one of my cats is usually in attendance whenever I’m out in the garden.)  And I’m delighted to report that today I was successful!  I’m sure you heard the song and dance when I downloaded the photos a few minutes ago 😉

This little chap settled on a branch amongst the trees about 1.5m away from me and proceeded to have a jolly good wash, so whilst he wasn’t quite still, at least he wasn’t flitting from branch to branch as they usually do, which made the task just a little easier. 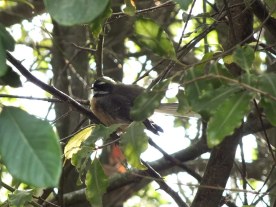 Hi. Henry Lee here. MC’s been a bit slack lately about keeping in touch with y’all, so thought I’d have a go. Besides, I heard her muttering something about a mouse on the desk here the other day, which sounded kinda interesting. Still looking for it. Maybe I misheard.

She was on the phone the other night, telling someone she’d been busier than a cat covering up. Pffft. What would she know. Seems to be out at night a lot lately – yacking on about a bridge somewhere or something. Three nights a week. And a couple of Sundays lately. And another one coming up next weekend, so I hear. Thought I’d pay her back the other night, her being out so late, so often – didn’t come when she called. You should have heard the panic in her voice. Out with a torch she was. Out on the road. Up and down the drive. Into the sheds down the back. Round and round the garden. (No teddy bears, though). Boy, was she glad when I finally appeared. Bit of a softie, she is. ‘Spose I shouldn’t tease her like that. Whatever.

Anyway. She’s been wittering on about the beautiful autumn colours, so thought I’d better share some of her photos. And a moon shot, and some sunsets. Oh, and she’s been over to Lyttelton, too, so there’s a few of those. She needs to get out with the camera again, though.

Well. Time for supper. I’d better see what she’s up to – probably asleep on the chair in front of the idiot box. See y’all next time. 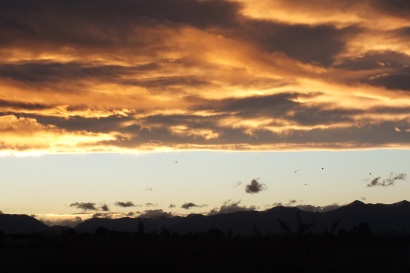 a fusion of textiles & smiles

Tales of the somewhat epic adventures of an ordinary Wyoming woman

About a life made full with animals.

The Task at Hand

A Writer's On-Going Search for Just the Right Words

I Don't Have The Map

Notes on Getting Lost and Getting Found

The Wrong'un at Long On

Invariably keeping my eye on the wrong ball since 2012

The adventures of a girl and her busy mind.

A Time to Create

...where miracles and mistakes collide...

Personal Essays - It's All About Curiosity & Connection